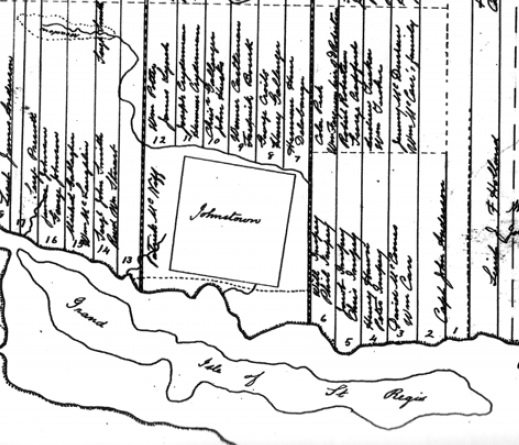 The UELAC St. Lawrence Branch has been given permission, by Edward B. Kipp, to make available his essential resource for Loyalist history in our region: Indexes of the McNiff map of 1786.

As related by him in his report “An Index to the 1786 McNiff Maps of the Townships of Lancaster, Charlottenburgh, Cornwall, Osnabruck, Williamsburgh and Matilda (the Loyalist Maps),” Kipp provides the background to the map:

“Patrick McNiff was one of the surveyors who assisted Major Holland of the British Army to survey Eastern Ontario before the Loyalists began to settle it. In early 1784, McNiff surveyed the front of Stormont, Dundas and Glengarry along the St. Lawrence River. The results of this survey were used to allocate the land. Each Loyalist drew a paper which contained the location of a lot. McNiff later prepared maps for Sir John Johnson of the six eastern townships dated November 1, 1786. These maps gave the concession and the lot number along with the name of the owner of each lot.”

He has prepared an index of the entire region covered by the McNiff maps, available here. (An index also appeared in Jacob Farrand Pringle’s 1890 history of the region, Lunenburgh or the Old Eastern District, which is available here, but we recommend using Kipp’s version.)

Finally, if you wish to peruse copies of the McNiff maps, scanned versions are available below. Note that in some cases, the maps spill over into the township adjacent to that listed.