I’d been driving for about 6 hours from Ottawa before finally arriving at the Oriskany Battlefield State Historic Site. The entrance gate was an unassuming exit from NY-69 and I’d managed to cruise past on my first attempt to find it. The sign attached at the gate read that it would be closing in 20 minutes so I moved quickly from the parking lot for a closer look at the monument and then down to the tiny visitors centre at the base of the hill behind the 93-foot obelisk. 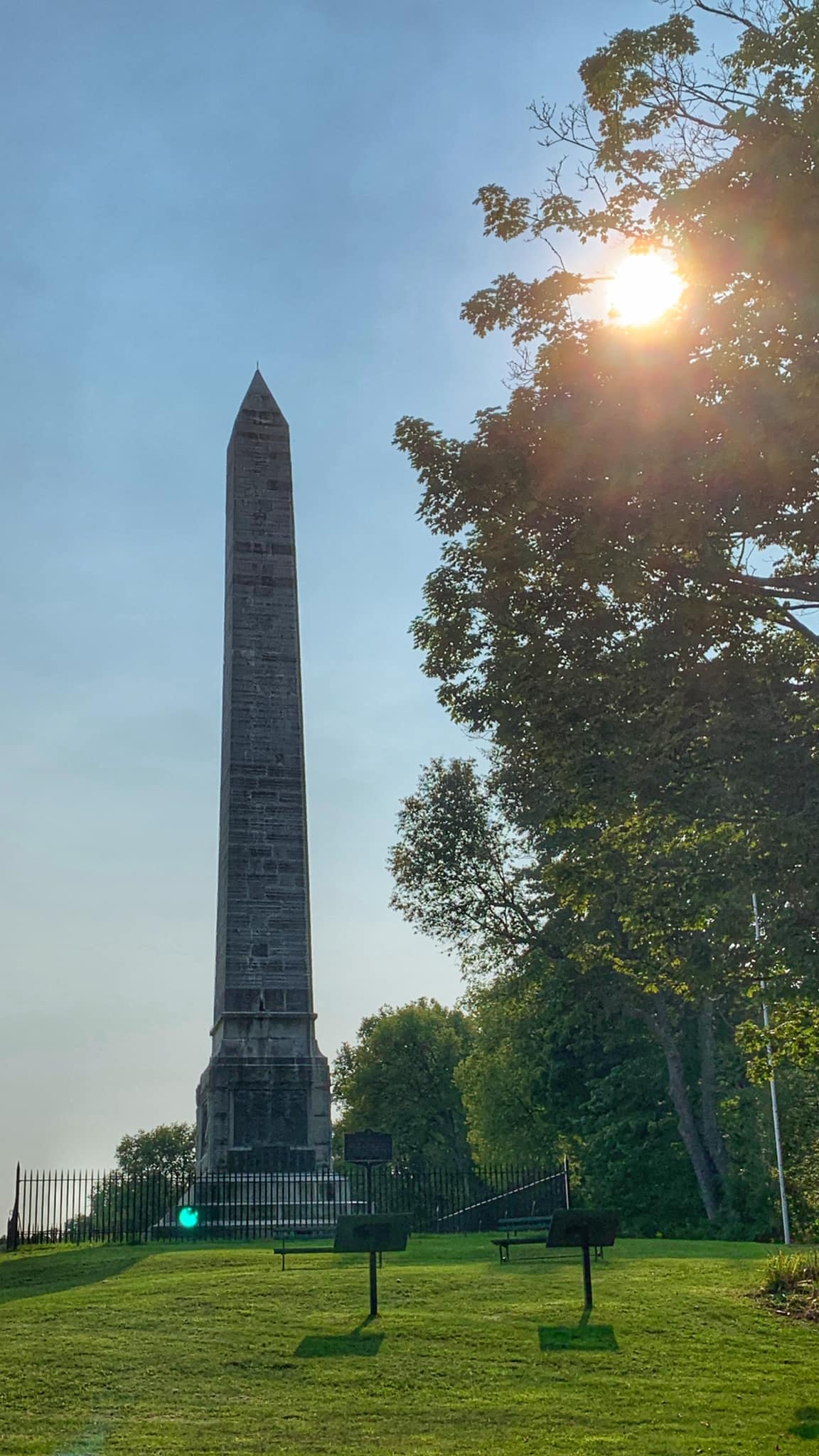 After a brief conversation about my connection to the events there, a worker and I chatted about what may be planned for the approaching 250th anniversary of the battle. Surprisingly, nothing had been proposed for what I’d expected would be an important commemoration in a country nostalgic for its patriotic history. In fact, I’d half-expected to drive up to a major tourist destination having been to many other American historic landmarks. That day, however, there was none of that to be found.

I explained my involvement with the St. Lawrence Branch of the United Empire Loyalists’ Association of Canada, and I suggested the anniversary might be an opportunity for descendant cousins from both sides of the battle to come together and recognize the tragedy that had occurred that day at Oriskany. After all, I explained, even the Mohawk and Oneida communities might be interested in attending for the sake of their ancestors too. 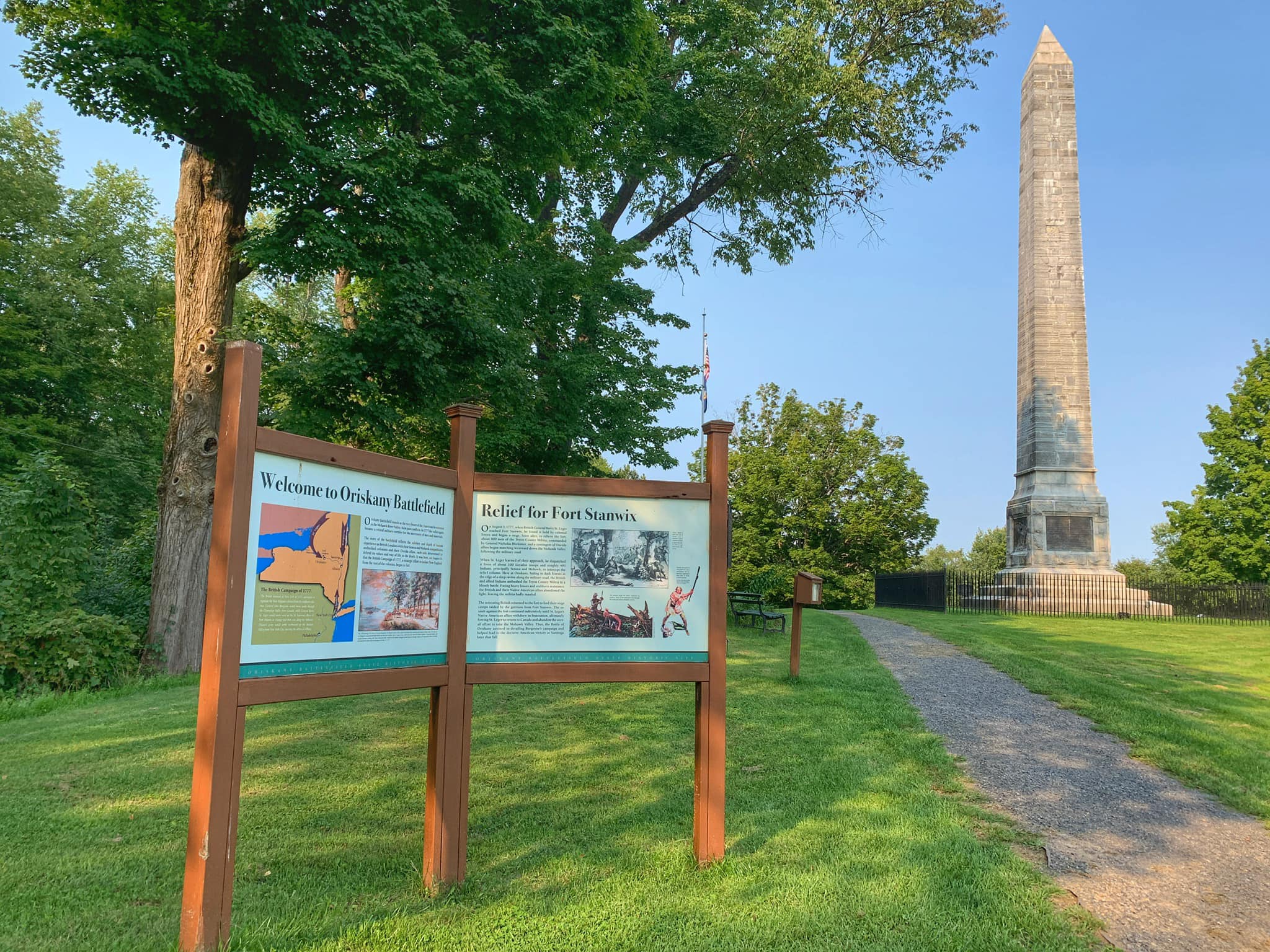 He looked at me sheepishly with a mix of concern. He seemed worried he might come across as offensive and looked disappointed that he could not offer the answer I had hoped for.

“I don’t think that will EVER happen sir.”

Clearly the wounds of this place have not healed.

After being reassured that the gates would remain open past the posted closing time, I wandered around the grounds and found myself walking the path taken by the Tryon Militia and their Oneida allies on August 6th, 1777. At least two of my great uncles, John Countryman and Heinrich Fetterly, were part of that group led by “Patriot” Brigadier General Herkimer. Unbeknownst to them, they were walking into an ambush. 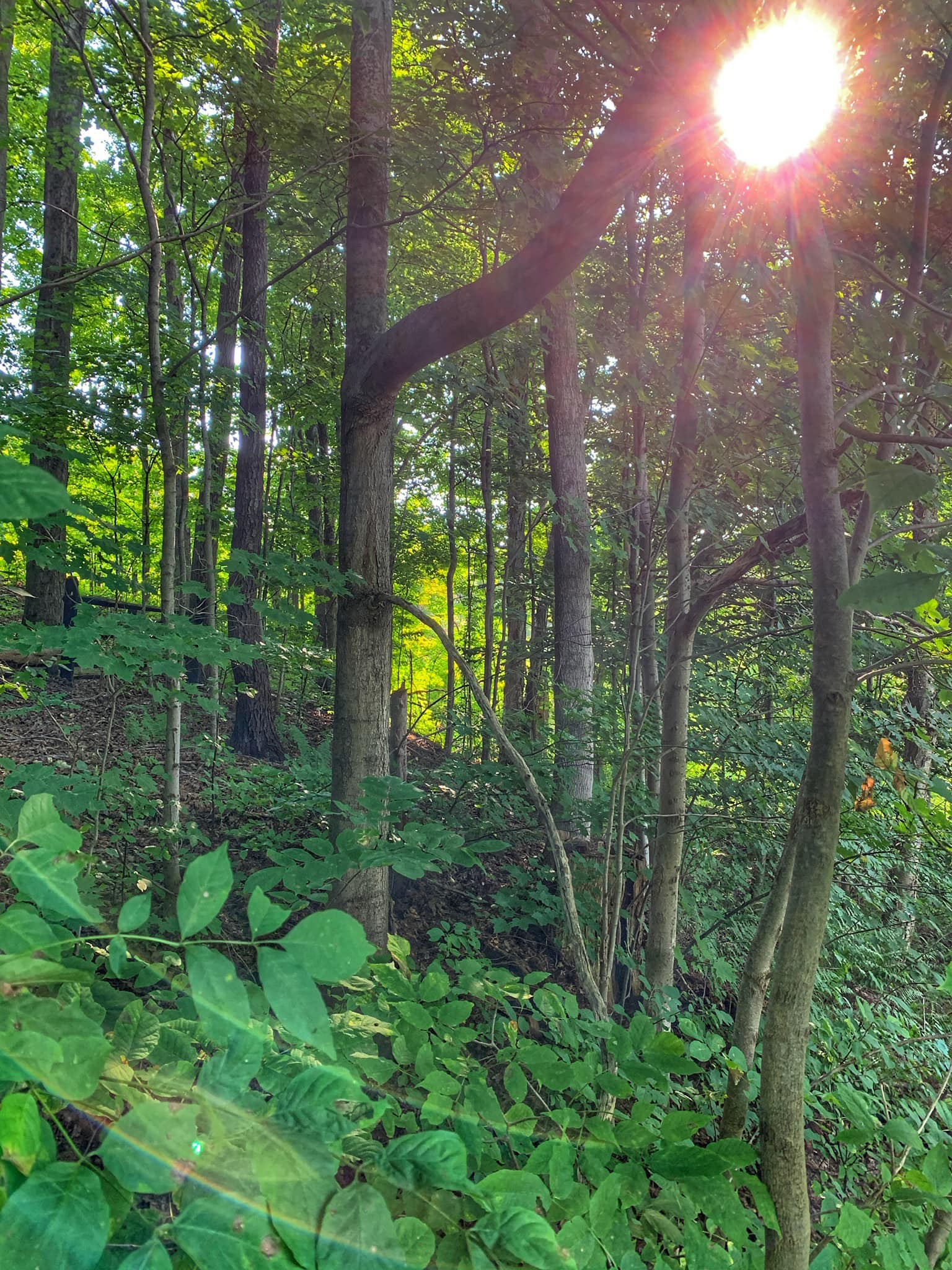 Above and almost completely all around the militia were Mohawk, Seneca and Loyalists who’d been exiled from their homes. They’d returned to the Mohawk Valley as members of the King’s Royal Regiment of New York. Sixth and seventh great grandfathers, Jacob Countryman (John’s brother) and Michael Warner, had just joined the regiment a few months earlier, but it’s difficult to know if they were there too.

The first shots were followed by hours of some of the most brutal and bloody fighting of the entire war. A second wave of fighting is said to have been hand-to-hand and terrifyingly personal as simmering grievances between former neighbours had reached their violent end. When it was over, around 400 militia men, including my great uncle Heinrich Fetterly, were dead. Less than a quarter of that number were killed on the Crown side but both groups abandoned the bloody ravine that day. The Loyalist forces scrambled to defend their camps which had been raided from Fort Stanwix. What was left of the militia dragged itself to safety. Both sides left most of their dead behind and when Major General Benedict Arnold’s Continental Army relief force passed through the area 18 days later, decaying corpses lay all around. That ugly scene marked the escalation of bitter hostilities and incredibly tangled allegiances in the Mohawk Valley. 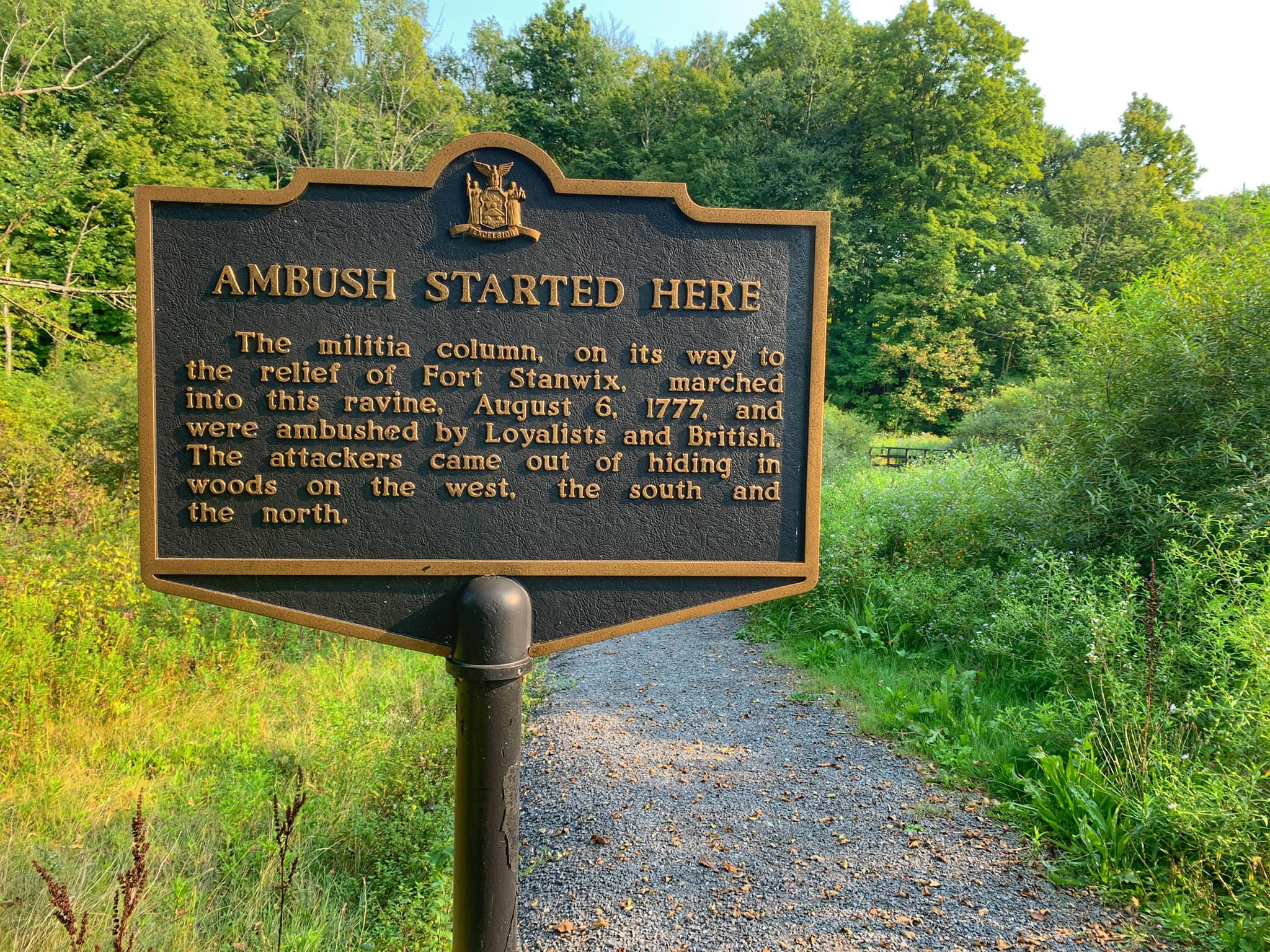 “Tangled” family allegiances may be too pleasant a word. “Mangled” may be more appropriate. 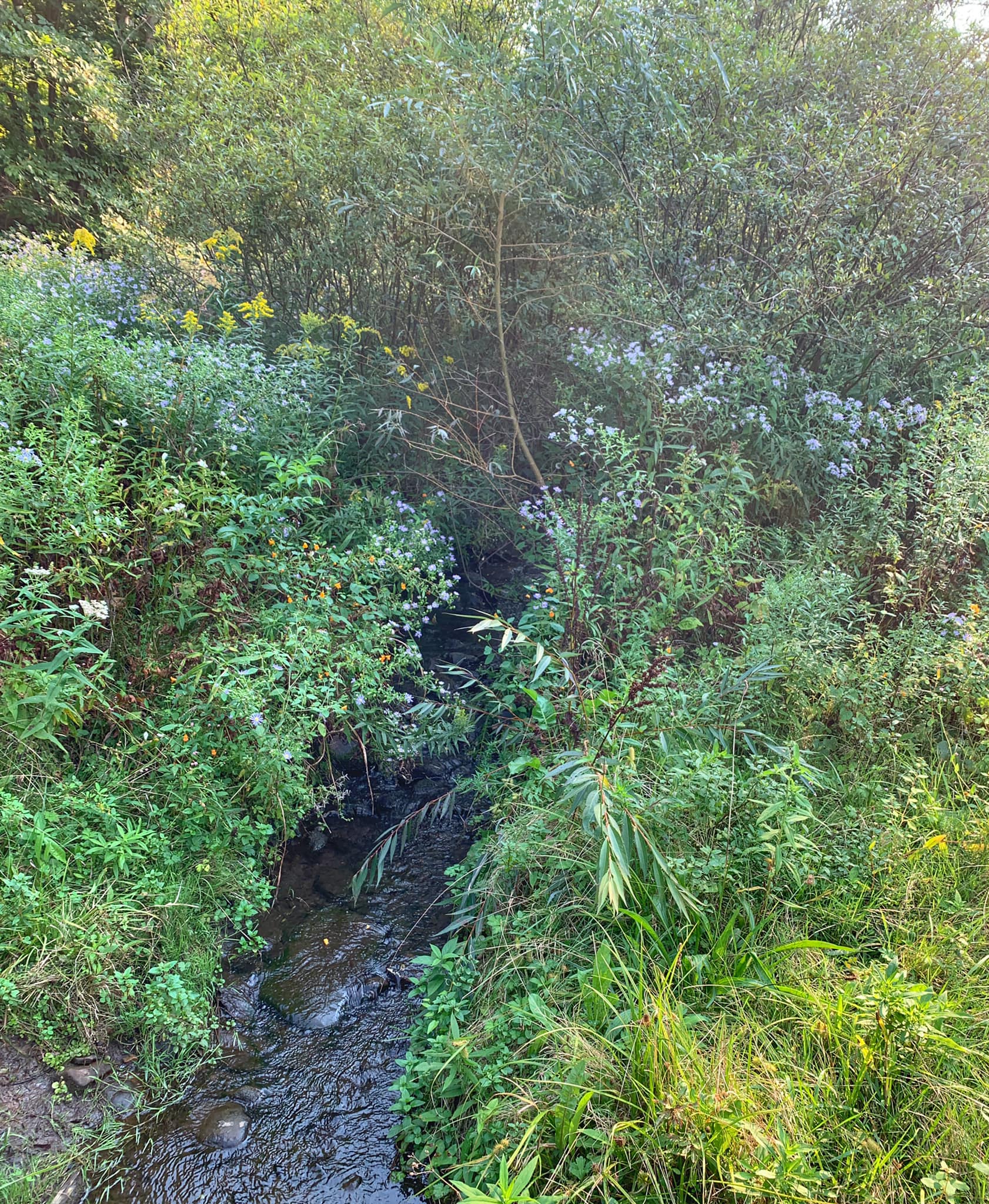 Standing at the Oriskany Creek in that ravine in 2022, I have to admit to being overwhelmed by it all. Again, I had not expected to visit such a bitterly serene, yet consequential, place. This ravine I’d read so much about was indeed too solemn to desecrate as some simple tourist attraction. I looked over to see an apple tree not far from the path and was repulsed at the thought of someone eating from it as I recalled accounts of the creek running red with blood.

The grandeur of the grey obelisk in the distance, despite its towering presence in the open field, paled in comparison to the quiet, bubbling of the creek below me and the wind in the trees all around. Was that peace I was hearing or something unsettling? Was it both? 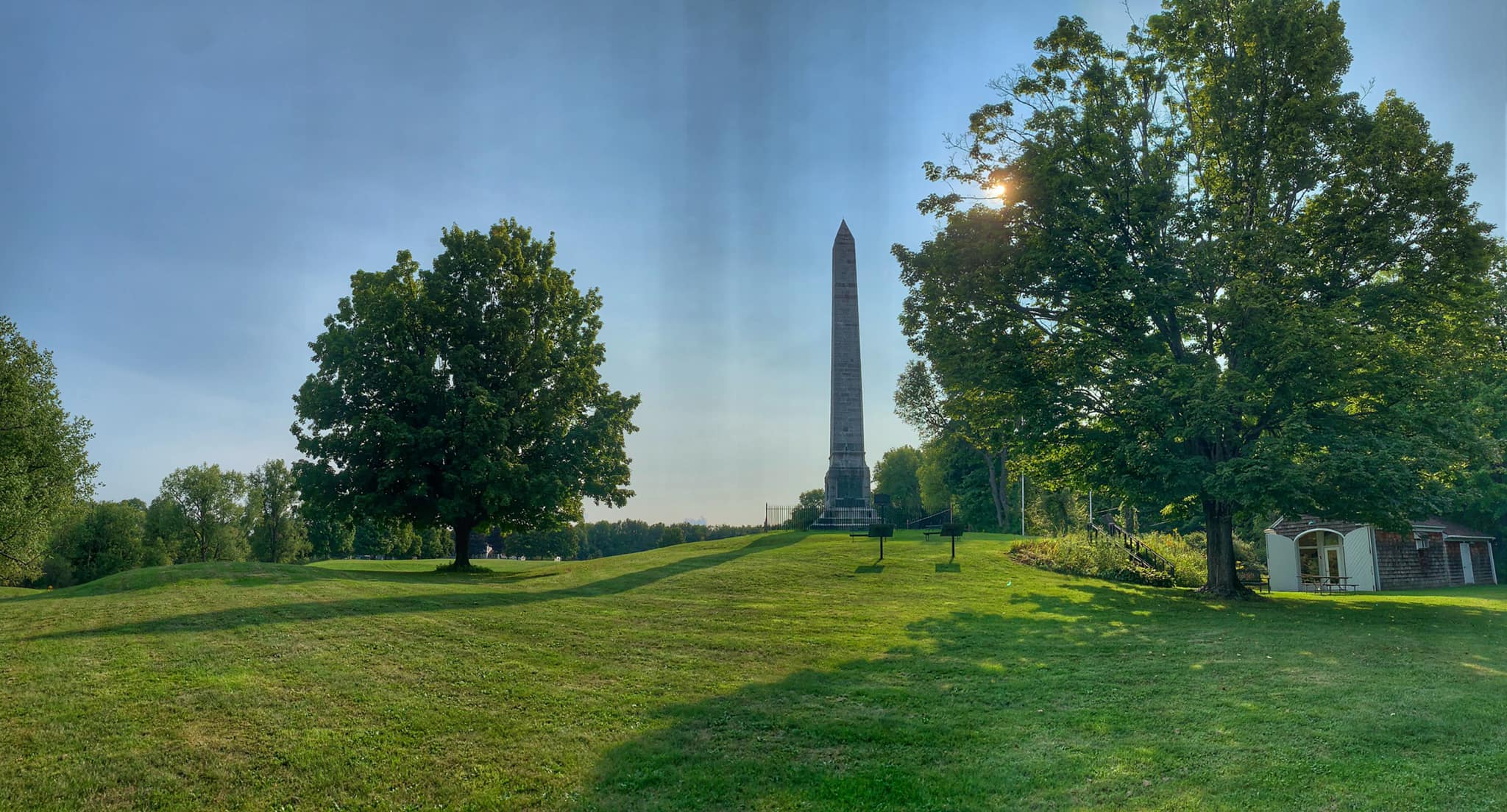 The worker had explained to me that, unlike so many other historic battlefields, reenactment activities are forbidden at the site. Oneida leaders consider it sacred ground. Walking back to my car that afternoon I wholeheartedly agreed. Peace may someday come to Oriskany. But it will take more than the suggestion of a descendant of its outcome for that to happen. 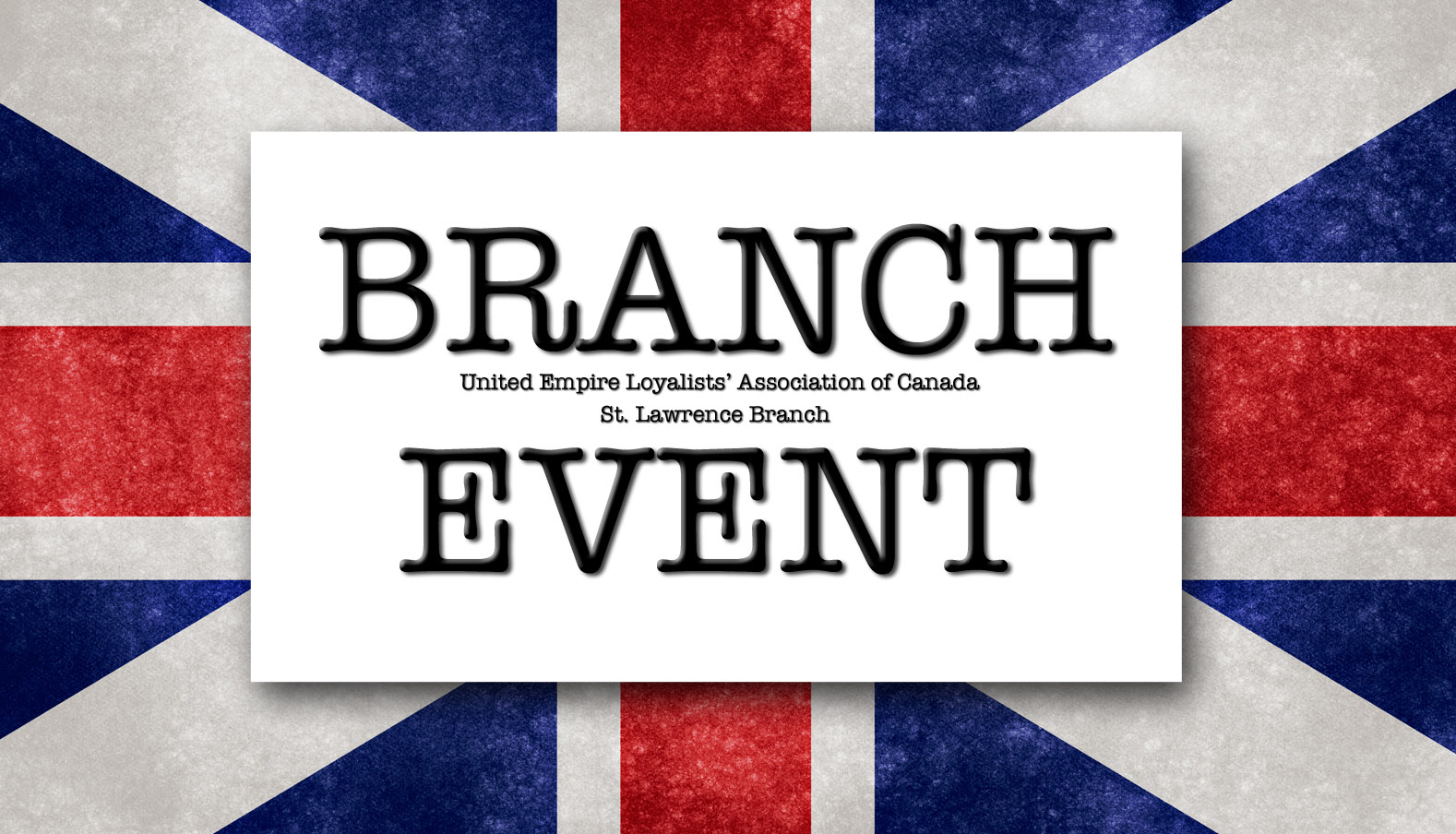 After a two-year hiatus due to COVID-19, our branch will once again be holding our annual charter night dinner, just in time for our 45th anniversary!

On September 17th, join us to mark the occasion at St. Matthew’s Presbyterian Church (15 Memorial Square) in Ingleside. Social hour will commence at 5:00 pm, with a turkey dinner being served at 6:00 pm.

Our special guest will be Eric Duncan, MP for Stormont-Dundas-South Glengarry, who will speak on the topic of “The Value of Protecting our Local and Canadian Heritage.”

Tickets cost $30 and will only be sold in advance to the dinner. To buy your ticket, please contact secretary Darlene Fawcett at dmfawcett@ripnet.com by September 7th. Non-members are welcome!

There will be two harvest baskets raffled after the meal. Each will include a copy of our cookbook, Loyalists at Table, as well as a copy of Loyally Yours – 100 Years of The UELAC signed by author Frederick Hayward UE. Guests are welcome to bring their own items to add to the baskets. There will also be a 50/50 draw. 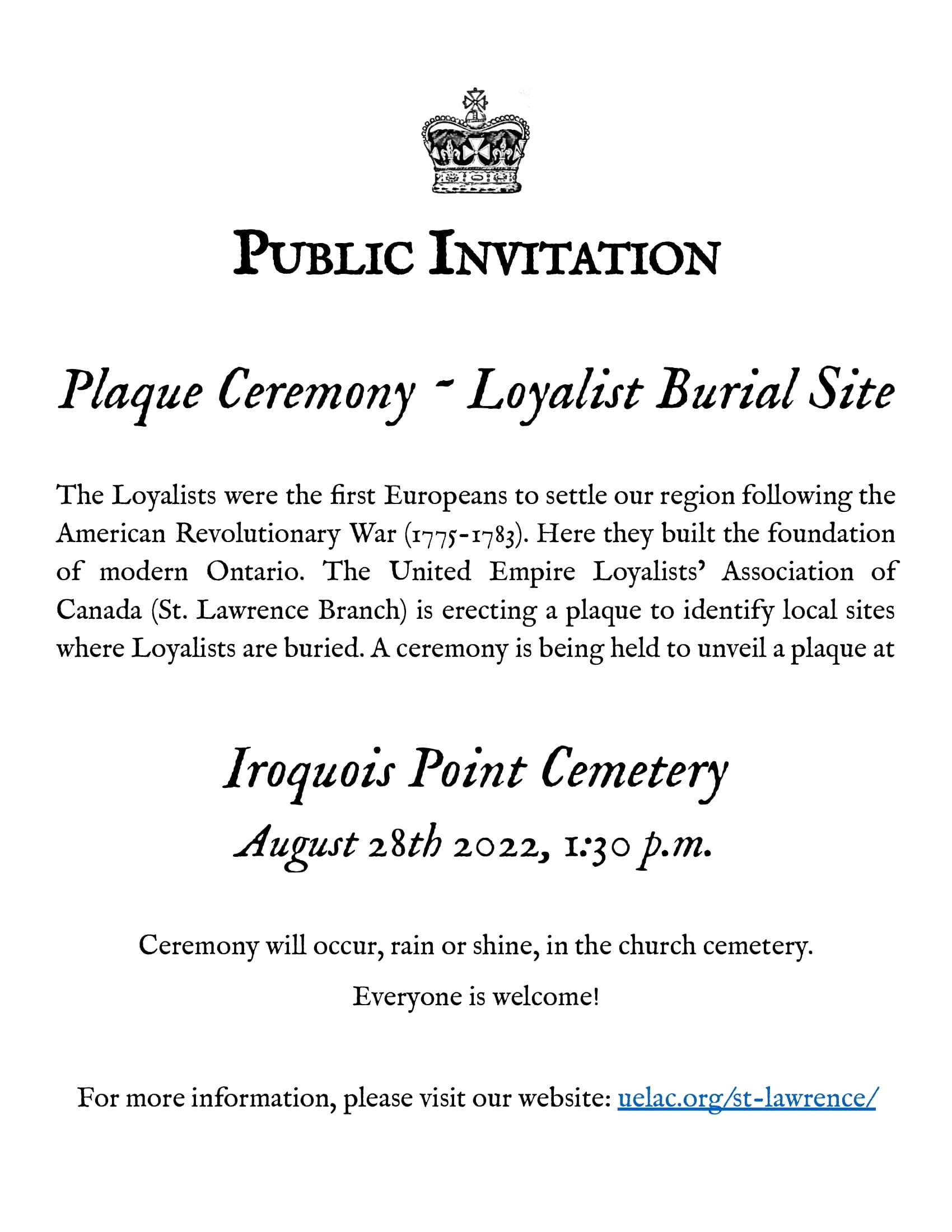 On August 28th, our branch will be dedicating a plaque to recognize the Iroquois Point Cemetery in Iroquois, Ontario as a Loyalist Burial Ground. The ceremony will go on, rain or shine. We hope to see you there!

The St. Lawrence Branch is happy to announce that the Loyalist Resource Centre is re-opening on May 2nd after being closed due to COVID-19.

Our new hours will be Mondays, Tuesdays, Thursdays, and Fridays from 9am to 3pm. Until further notice, the centre will be open by appointment only, so please contact our president/genealogist Lorraine Reoch at fancylass@hotmail.ca before you visit. 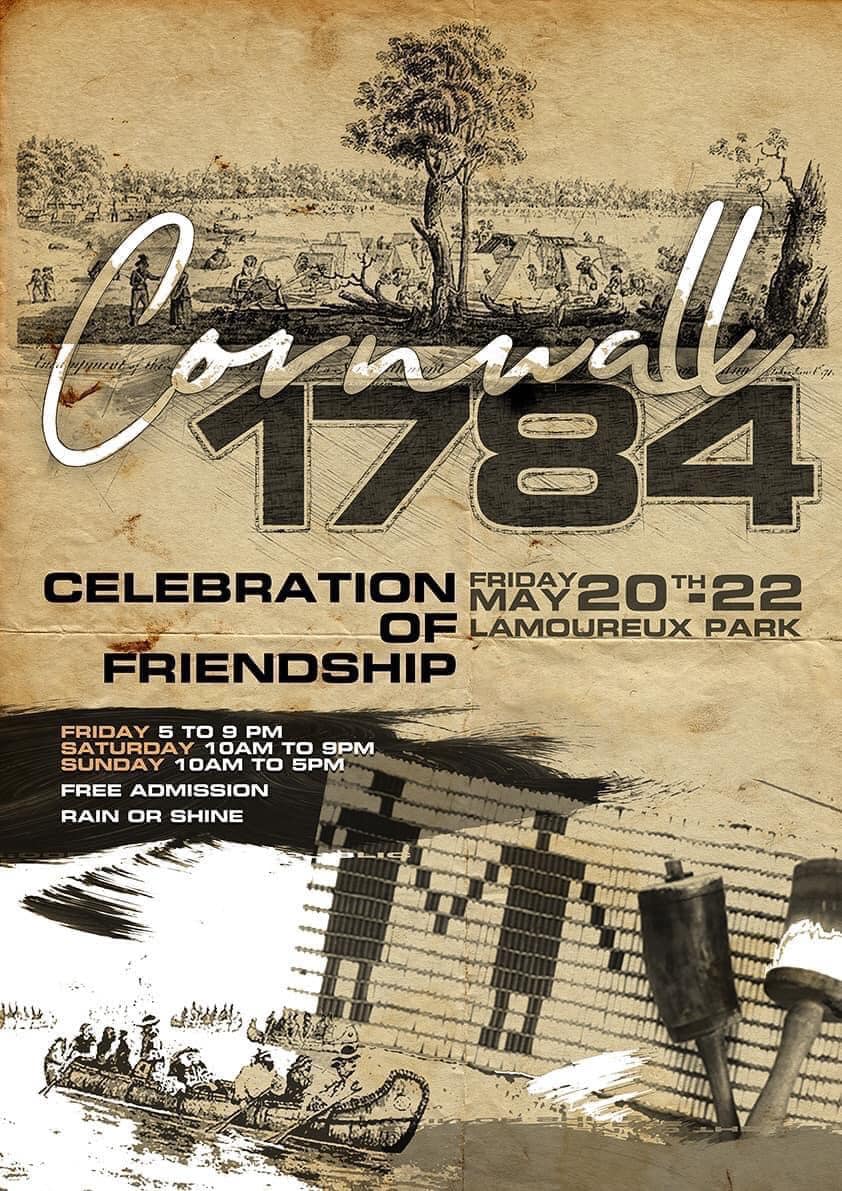 The Stormont, Dundas, and Glengarry Historical Society, in connection with the Cornwall Community Museum, is hosting an event to commemorate Ontario’s rich history from May 20th to 22nd in Cornwall. Cornwall 1784 “A Celebration of Friendship” will feature reenactors, artifacts, and activities representing Indigenous peoples, French-Canadians, and United Empire Loyalists, the three major actors in S, D, and G’s early history.

The St. Lawrence Branch UELAC, along with the Dominion Office, will be operating a booth at the event on both Saturday May 21st and Sunday May 22nd. We hope to see you there!

We have added a book to our marketplace!

The book is titled Our Roxborough Connection: The Descendants of John and Susannah Montgomery and John Shea and Elizabeth McIntosh by Dr. David Montgomery. These are original copies from when the book was first published in 1989.

The books are priced at $20.00, plus shipping and handling. To get your copy, email Darlene Fawcett at dmfawcett@ripnet.com

The St. Lawrence Branch will be holding their fall meeting on October 3rd at 1:30 pm via Zoom. A link has been sent out to all current members. If you did not receive the link, or you are not a member but are interested in joining the meeting, email Ashley at adrharper@gmail.com

We hope to see you there!

The St. Lawrence Branch will be holding our Annual General Meeting  via Zoom on June 27th at 1:30 pm (Eastern Time).

A meeting link will be sent out to all current members. Anyone who is not currently a member can email the branch’s vice president Ashley Harper to register for the meeting. We hope to see you there

Ever heard of Vinegar Pie, Spruce Beer or Moose Meat Salisbury? What about Hasty Puddings or Pocket Soup?

On Wednesday, March 10 at 7:30 pm our friends at the Toronto Branch of the UELAC are hosting a presentation by our secretary, Darlene Montgomery-Fawcett. Darlene and fellow St. Lawrence Branch member, Laurie McDonald, developed a cookbook, Loyalists at Table, a compilation of recipes from our ancestors’ time. She will discuss the history of food preparation around that time and talk about adapting and testing a variety of loyalist recipes including some Indigenous ones.

All are welcome. The meeting room opens at 7:15 p.m. For the meeting coordinates, please email Sally Gustin UE at gustin.deboer@gmail.com 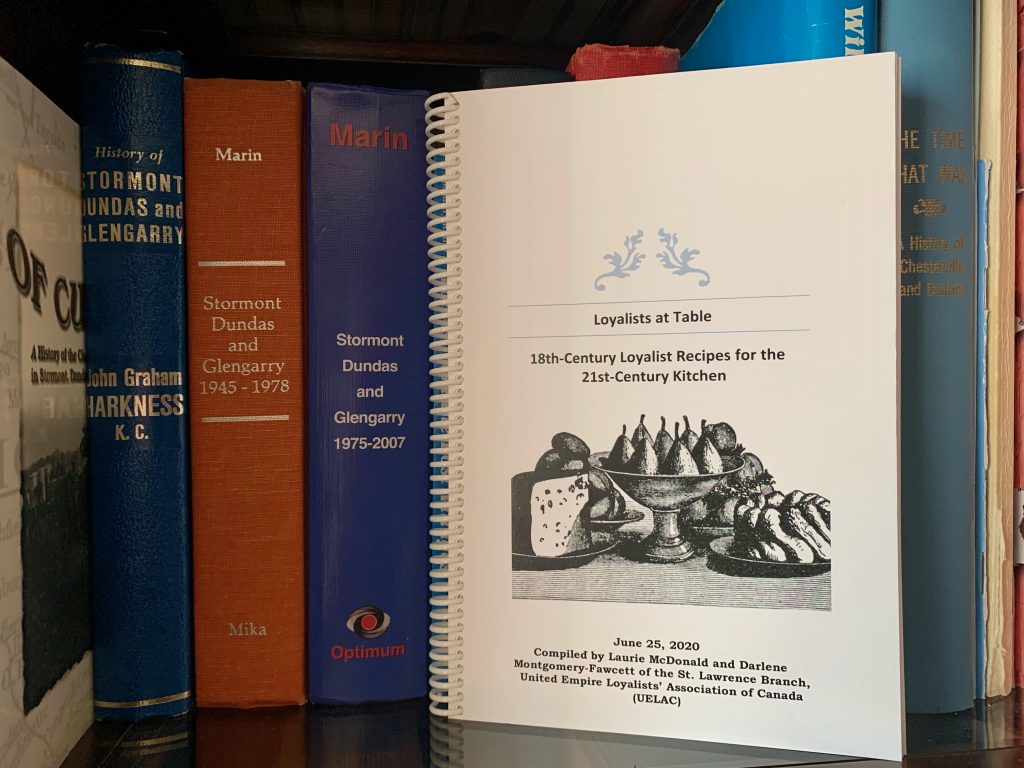 Looking for the perfect Christmas gift? Give the gift of history with the St. Lawrence Branch’s cookbook, Loyalists at Table. Filled with delicious recipes that have been adapted for the modern kitchen, your loved one can immerse themselves in Loyalist cuisine and learn some of the history that goes along with it.

Print books are $20 plus shipping, and digital files are $15. Get your copy in time for Christmas by contacting our branch secretary, Darlene Fawcett, at (613) 989-5489 or dmfawcett@ripnet.com, or by messaging our Facebook page, St. Lawrence Branch UELAC.